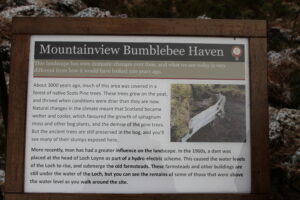 About 3000 years ago much of this area was covered in a forest of native Scots Pine trees. These trees grew on the peat and thrived when conditions were much drier than they are now. Natural changes in climate meant that Scotland became wetter and cooler, which favoured the growth of sphagnum moss and other bog plants, and the demise of the pine trees. However, the trees are still preserved in the bog and you’ll see many of their stumps on your walk.

More recently, man has had a greater influence on the landscape. In the 1960’s a dam was built at the head of Loch Loyne as part of a hydro-electric scheme. This caused water levels to rise and submerge the old farmsteads. Although still under the water you will see the remains of others as you walk around the Reserve.